S4
Gloria is a minor one-off character of Two and a Half Men. In her debut in the Christmas episode "Walnuts and Demerol", she's the woman Charlie has a one-night stand with. Evelyn tries to keep them apart, but both Gloria and Charlie start to sleep together.

Later she's revealed to be his and Alan's half sister from when their mother's husband (and their father) Frank Harper would swap partners with Dorothy's husband and sleep with Gloria's mother Dorothy.

Gloria had been on a date with Charlie before, to the point where they both flirted with each other, had a few drinks and eventually made out in his car. In "Walnuts And Demerol" during Christmas Eve, Charlie tried to get rid off his family members and their relatives, so he could get Gloria drunk and have sex with her. However, she arrived when everyone was present at the house, including Evelyn. Evelyn realized that Gloria is Charlie's half sister (via his father Frank). She managed to stop Charlie from sleeping with her and called Gloria's mother, who explained it to Charlie and Gloria. Though Gloria revealed that the idea of incest turns her on even more in bed, Charlie stopped her, having found his 'limit' in sexual debauchery, that being incest. She also reveals to Charlie that her own sexual boundary is sleeping with fat guys and draws the line at such acts then drunkingly asks Charlie if he would sleep with a fat guy when he says he draws the line at committing incest. Strangely, it is never made clear if she truly is Charlie's and Alan's half-sister, and she is never even mentioned again. According to her mother, she isn't always blonde, meaning that she may not be a naturally blonde haired woman. 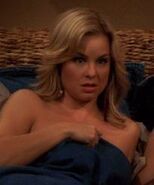 Add a photo to this gallery
Retrieved from "https://twoandahalfmen.fandom.com/wiki/Gloria?oldid=26527"
Community content is available under CC-BY-SA unless otherwise noted.