Two and a Half Men Wiki
Register
Don't have an account?
Sign In
Advertisement
in: Characters, Main Characters, Season 3 characters,
and 10 more

Kandi is portrayed as a twenty-two year old dumbbell. While sweet and pretty innocent, Kandi is dimwitted and loves to sleep with older men (which would explain her being with Charlie Harper, Alan, and her and Judith Harper-Melnick's divorce lawyer). Both Herb and Charlie's replacement, Walden Schmidt, couldn't believe Alan was married to her. Though Kandi is dimwitted, she was smart enough to sign her and Alan's divorce papers, before she accepted a role as an investigative reporter on a television show called "Stiffs". Kandi seems to have daddy issues since she always sleeps with older men. However, when her father appears, they seem to have a great relationship.

Because of their similar low intelligence, she and Jake got along well.

Unlike Alan's divorce with Judith, Kandi and Alan would still become friends afterwards and were happy when they saw each other again.

Kandi is first introduced in season three as a dimwitted twenty-two year old named Kimber. She and Charlie Harper were having a fling at the time. Kandi was renamed in future episodes as Kandi. She returns because Charlie hasn't been returning her calls because of his new relationship with Mia. Kandi confronts Alan about it and he tells her that she will find someone out there who loves and cares for her. Kandi and Alan start a relationship together. Alan doesn't want to show off Kandi because he worried about what people will think of her. Alan starts paying all of Kandi's bills and accessories. Kandi moves in with Alan at the end of an episode in season three. Alan gives Kandi a job as his assistant. Alan and Kandi get into a fight which leads to Alan's ex-wife, Judith Harper taking Kandi out for drinks and to bitch about Alan. Kandi and Judith return home intoxicated where Kandi dumps Alan and moves in with Judith. Kandi's divorced mother Mandi starts sleeping with Charlie while Kandi's father Andy starts sleeping with Judith. Alan and Kandi get back together and Judith throws Kandi out for sleeping with her ex-husband in their hot tub. Kandi and Alan are the best man and maid of honor at Charlie and Mia's wedding. After Charlie and Mia call off the wedding, Kandi and Alan marry instead.

Four months later in season four, Alan and Kandi buy a condo after Alan wins half a million dollars. Kandi throws Alan out and files for divorce for unknown reasons. Alan and Kandi fight for custody of their dog Chester similar to how Alan and Judith acted while fighting for custody of Jake. Judith gives Kandi her former divorce lawyer and Kandi gets to keep everything and will be receiving alimony from Alan. It seems that even though Alan and Kandi are divorcing, they have become friends with benefits. Kandi returns to the Harper's house for Christmas because her boyfriend is spending Christmas with his wife and kids. Judith's fiancee Herb Melnick starts developing a crush for Kandi. Kandi plays the piano and sings off key, even singing the wrong lyrics in Christmas songs. In her final appearance Kandi auditions for the role of a detective on a new show called "Stiffs". It is revealed that Kandi is divorcing Alan because of his ear hair, nose hair, chest hair, and most of all because she wanted kids and he didn't. Alan decides he wants kids so he and Kandi prepare to reconcile and have a kid when Kandi gets a phone call. She gets the role on the TV series but she signs the divorce papers before accepting it, that way Alan gets nothing from her in the divorce. Kandi throws Alan out of her condo and is never seen or mentioned again other than Alan saying he's been married twice.

Kandi reappears once in season 10 episode I Scream When I Pee. She emails Alan to let him know that she is in town. It became clear wants Alan back and says "he is the best she had" but Alan turns her down due to his loyalty to Lyndsey. Later on, Kandi invites him over after pretending to be depressed but he again turns her down. She remarked that Alan not wanting her made her want him more but if he did then she wouldn't want him, before she stated he should just sleep with her as he remarked that her explanation made sense which scared him. She goes over to Lyndsey's house and explains that nothing happened between her and Alan. They bond over being shocked that Alan turned her down as well as admitting that he isn't very good in bed. After (for unknown reasons) Kandi had sex with Lyndsey, they both agree while in bed that Alan can never know about their hook-up.

kandi is a gorgeous young woman, she has long red hair, blue eyes, very pale skin has a nice body, and wears revealing clothing, she also wear a necklace with a green heart. Kandi is loved by a lot of men because of her looks, particularly her large breasts.

Not much of Kandi's family is known in the series. Kandi is the daughter of Mandi and Andy. Kandi got her good looks from her mother but she got her dumb brains from her father. Kandi has so far, only been married once that we know of. She was married to Alan Harper for four months in 2006 after they eloped in Las Vegas after Alan's brother Charlie Harper called off his wedding to Mia. Kandi use to have casual sex with her brother-in-law before she started dating Alan. Kandi's mother-in-law, Evelyn Harper prefers Alan's first wife Judith more even when Evelyn despises Judith. Evelyn doesn't like Kandi because of her dumb personality. Kandi got along great with her stepson, Jake Harper due to their personalities being the same in stupidity. 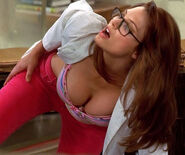 Kandi, as she appears on "Stiffs"

Kandi to Judith: "And you must be Jake's grandma!"

Kandi and Lyndsey after they have sex for the first time.

Community content is available under CC-BY-SA unless otherwise noted.
Advertisement